A code-complying kitchen ventilation system removes a substantial amount of air from the building in order to properly capture the smoke, grease vapors and heat created during the cooking process. As this cooking effluent is removed, negative pressure (a vacuum) is created causing replacement air from other parts of the building and outdoors to be drawn into the kitchen where it, in turn, is exhausted along with the cooking fumes. When this replacement air is heated or air-conditioned, this process becomes rather expensive and increases operational overhead.

The solution is to provide the hood with its own make-up air thus reducing the amount of conditioned air removed from the building. One way of doing this is to install a separate system which introduces outside air into the kitchen area in general with its own duct work and diffusers. However, this would be very uncomfortable during the colder months so it would be necessary to heat this replacement air. Unfortunately heating this volume of air would be very expensive and would only further increase operational overhead. We have developed a patented system that brings untempered outside air into a plenum area above the hood and delivers the replacement air at the hood via adjustable air controllers on the front of the hood and adjustable air registers on the face of the plenum enclosure. This is referred to as a compensating make-up air system – the untempered, outside air “compensates” for the air being removed by the exhaust blower.

This method can replace up to 60% of the exhaust air volume without the expense of heated make-up air. The remaining 40% is made up by normal building infiltration and the HVAC system (or a separate heated make-up air system). 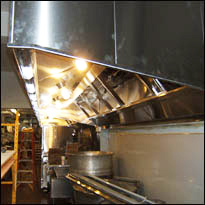 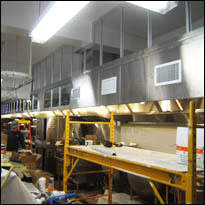